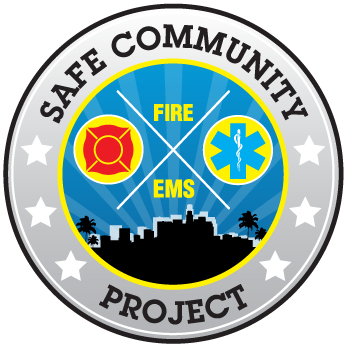 As a new organization, we are asked about our directors. Shortly, we’ll be adding a section to the website that will highlight our Directors and key staff/contractors. For now, let’s introduce you to a few of them, and explain their involvement in this important program.

David Barrett – With a long background in brand development, film and TV production, education and training, David is the founder of MySafe:LA and a co-founder of The Safe Community Project. Raised in multiple places as part of a motion picture household, David’s father is Terry Sanders, a two-time Academy Award winning producer/director. When David was a young boy, Terry produced several TV documentary films for David L. Wolper, including The Story of a Fireman. “I remember riding in a Battalion Chief’s car on the freeway at night in emergency, and its something I’ll never forget,” David remembers. The film, about LAFD member and eventual interim Fire Chief Allen R. Evanson, helped foster David’s interest in supporting the community and the Department. Prior to his involvement with the LAFD, David spent 20 years as a corporate CEO, founding and growing technology and brand agencies, including the creation of VideoScape 3D (precursor to Lightwave 3D). His firms worked closely with Apple, Inc. for 18 years, among others. He has worked with the LAFD since 2002, collaborating with the LAFD Museum and then Chief Engineer William Bamattre. The initial pilot program for MySafe:LA was developed in 2008 with Chief Engineer Doug Barry and was funded by David and his wife, Cameron. In 2009, the program took off and the rest is history. David is an award-winning filmmaker, with more than 150 projects to his credit. David is a graduate of Immaculate Heart College with a Bachelors of Arts in Music.

Cameron Barrett – Cameron has an extensive background in broadcast journalism, education, and film. She is a co-founder of The Safe Community Project. When Cameron Barrett moved to Los Angeles to be with her soon to be husband David, they spent a day driving around Hollywood, and came upon Old Fire Station 27, now the home of the LAFD Museum. It was there that the seeds of what is now MySafe:LA were first planted. Cameron has an extensive background in journalism, including as a reporter, then anchor for an NBC affiliate (WMGC-TV), News Director, and writer. She then taught broadcast journalism at St Joseph’s College, the University of Miami, and the University of Georgia. Her expertise in journalism, video production, and education became a perfect fit for MySafe:LA. Cameron is an award-winning filmmaker in her own right, and her films have been awarded top prizes in multiple festivals. She is a graduate of Brown University and earned a Masters in Broadcast Journalism from Northwestern University.

Margaret Stewart – Margaret has extensive experience in business management, firefighting, and serving the public. She is a co-founder of The Safe Community Project. In 2006, Margaret Stewart realized her dream to become a Los Angeles City Firefighter. And this is a woman who excels at reaching high – and setting the bar higher each time. After graduating from the United States Military Academy at West Point, Margaret served in the United States Army. She was a pilot on UH-60 helicopters, a Battalion Assistant Supply Officer, Battalion Intelligence Officer, Brigade Adjutant, and Division EO Officer. She left her Military career with the rank of Captain. From there, Margaret stepped into corporate life, as served a marketing executive with Bristol-Myers Squibb, living in England and France. She then settled in southern California in late 2005, with her sights set on becoming a firefighter. Her brother Dale is a Captain with the Oceanside Fire Department. Margaret brings expertise in pet safety and K9 education to MySafe:LA. In March of 2008, she became a certified SAR K9 handler with FEMA’s Urban Search and Rescue California Task Force 1. She is a graduate of the United States Military Academy at West Point with a Bachelor of Science, and then earned a Master of Business Administration from the London Business School.

Dean Cathey – Dean has extensive experience in the fire service, FEMA, and non-profit leadership. He is a co-founder of The Safe Community Project. As an Assistant Chief with the Los Angeles City Fire Department, Dean Cathey was responsible for all fire companies in one half of the city at any given time. Prior to retiring in 2004 as an Assistant Chief, Dean had an active career, promoting from firefighter to staff assistant, dispatcher, Apparatus Operator, Engineer, Captain and Battalion Chief. Chief Cathey held key assignments in essential areas of command, including Community Liaison Officer, Planning Section Chief, Division Commander for Divisions 1 and 3, as well as being the Assistant Bureau Commander for the Bureau of Emergency Services. Chief Cathey was also the Principal Task Force Leader for California Task Force, and a FEMA/CalOES US&R Program. Today, Dean remains with FEMA, serving as a Deputy Incident Support Team Leader. Following retirement, Dean joined the board of directors for the LAFD Historical Society and Museum. It was there that he learned of the opportunity that was to become The Safe Community Project. Dean is a graduate of the University of Redlands and the National Fire Academy Command and Staff Program.

Steven Owens – For many people, Steve Owens is thought of as the Mayor of the Cahuenga Pass. For the past 15 years, he has served as a Captain I in the Los Angeles City Fire Department. His assignment at Fire Station 76 in the Cahuenga Pass has given Captain Owens the opportunity to create a strong tie with the local community. If you see Steve at any incident in the Hollywood or North Hollywood area, there are certain to be citizens calling his name and running over for a handshake or a hug. Before joining the LAFD, Captain Owens served in the United States Air Force for nine years and an additional 11 in the Air Force Reserve. His fire department career included assignments in busy areas of the city, and after ten years as a firefighter, Chief’s Aide, and Engineer, Steve was promoted to Captain, responsible for his own engine company. In addition to his field duties, Captain Owens has extensive training experience, including but not limited to serving as training cadre member for Flashover Simulator, Search and Rescue Operations, Firefighter Survival, Self-Contained Breathing Apparatus (SCBA) Air Management and Weapons of Mass Destruction (WMD) Training teams. Special assignments included investigative duties for significant incidents and professional standards. His role with MySafe:LA includes managing the training for all instructors prior to field assignments and in a continuing education role. Steve is also the Associate Pastor and President of the Church of God in Jesus Christ.

This board of Directors is the foundation upon which a number of fire and life safety initiatives will be developed. While the initial program will evolve in Los Angeles, The Safe Community Project will endeavor to build relationships and programs in any area of the country where behavior change relative to fire safety is essential.